Clinical usefulness of NedCodo/IBV in the assessment of elbow pathologies: A case report. Featured

A rupture of the distal biceps brachii tendon usually occurs when the elbow is in flexion and the forearm in supination. When such a rupture occurs, it tends to cause chronic pain and loss of strength, which is why surgeons recommend surgery for this pathology. The NedCodo/IBV software performs a quantitative assessment of mobility and strength in elbow pathologies in an easy, streamlined and simple way thanks to its reduced number of markers, its test recommendation system, and its ability to compare the results with a normalcy database segmented by age, sex and dominance in terms of the movement performed, thus assisting professionals in the diagnosis and follow-up of this type of pathology. A clinical case follows below, in which a patient’s biomechanical limitations are analyzed and the clinical usefulness of this tool for clinical professionals is presented.

The biceps brachii muscle is the primary supinator of the forearm and the second flexor of the elbow joint (1). The distal tendon of this muscle inserts into the bicipital tuberosity of the radius (2). Such ruptures usually occur after an eccentric load is applied while the elbow is in flexion and the forearm in supination (1). They most frequently affect men between 30 and 50 years of age (3).

These injuries can cause chronic pain and loss of strength when performing forearm supination and elbow flexion (4). Most surgeons recommend surgery both to restore maximum strength to the forearm and to alleviate pain in the antecubital fossa (1).

Complementary tests are available to assess this pathology, such as the Hook test, the biceps compression test, or the passive forearm pronation test (5). However, these tests do not always accurately reflect the pain or limitation reported by the patient, and a functional assessment that is as objective, reliable and sensitive as possible is needed to detect clinically relevant changes.

In this context, the Instituto de Biomecánica (IBV) has developed a computer application to help professionals to perform a functional evaluation of the elbow, the aim being to facilitate the study of pathologies in this anatomical area. The NedCodo/IBV software performs a quantitative assessment using a photogrammetry and isometric dynamometry system. The application obtains both kinematic and dynamic information when performing different movements that may be affected by different elbow pathologies, delivering automatic results in real time. These data can be compared against a normalcy database created by the IBV, which is segmented by sex and by healthy and pathological subjects.

In the clinical case set out below, the NedCodo/IBV application has been used to assess the functional capacity of the elbow of a patient with a ruptured distal biceps tendon. After two surgical interventions, the patient was still experiencing pain and biomechanical limitations. The objective was to determine the patient’s limitations when performing different functional movements, which have been included in the evaluation protocol, in order to begin a new rehabilitation protocol that might allow the patient to improve his quality of life after another intervention.

A 50-year-old man suffering from a rupture of the distal biceps tendon. He underwent surgery with fixation but required further operation eight months later. He was referred to the IBV assessment service, presenting pain in his left elbow when bearing weight, generalized pain during elbow flexion and extension and limited mobility. Deemed the movement analysis application best suited to his pathology, the NedCodo/IBV application was used to carry out a functional assessment of the patient. We were thereby able to quantitatively determine to what extent he was limited in terms of strength and mobility after the reintervention in order to begin a new rehabilitation programme that would allow him to enjoy a better quality of life.

The patient was simply fitted with a small number of markers on the upper limb (Illustration 1). The assessment protocol consists of different mobility tests with loads, including maximum flexion-extension and pronation tests, an assessment of the reaching activity, and different strength tests. The NedCodo/IBV application has a test recommendation and selection system (Illustration 2) which helps clinical professionals to choose and perform the most suitable tests. In our case, the test recommendation system suggested that we perform the flexion-extension mobility test with 0 kg and 2 kg, the pronation and supination test, and the reach test. It also recommended that we perform an isometric strength test in pronation-supination in different positions. The results obtained for both arms were compared with the normalcy database. 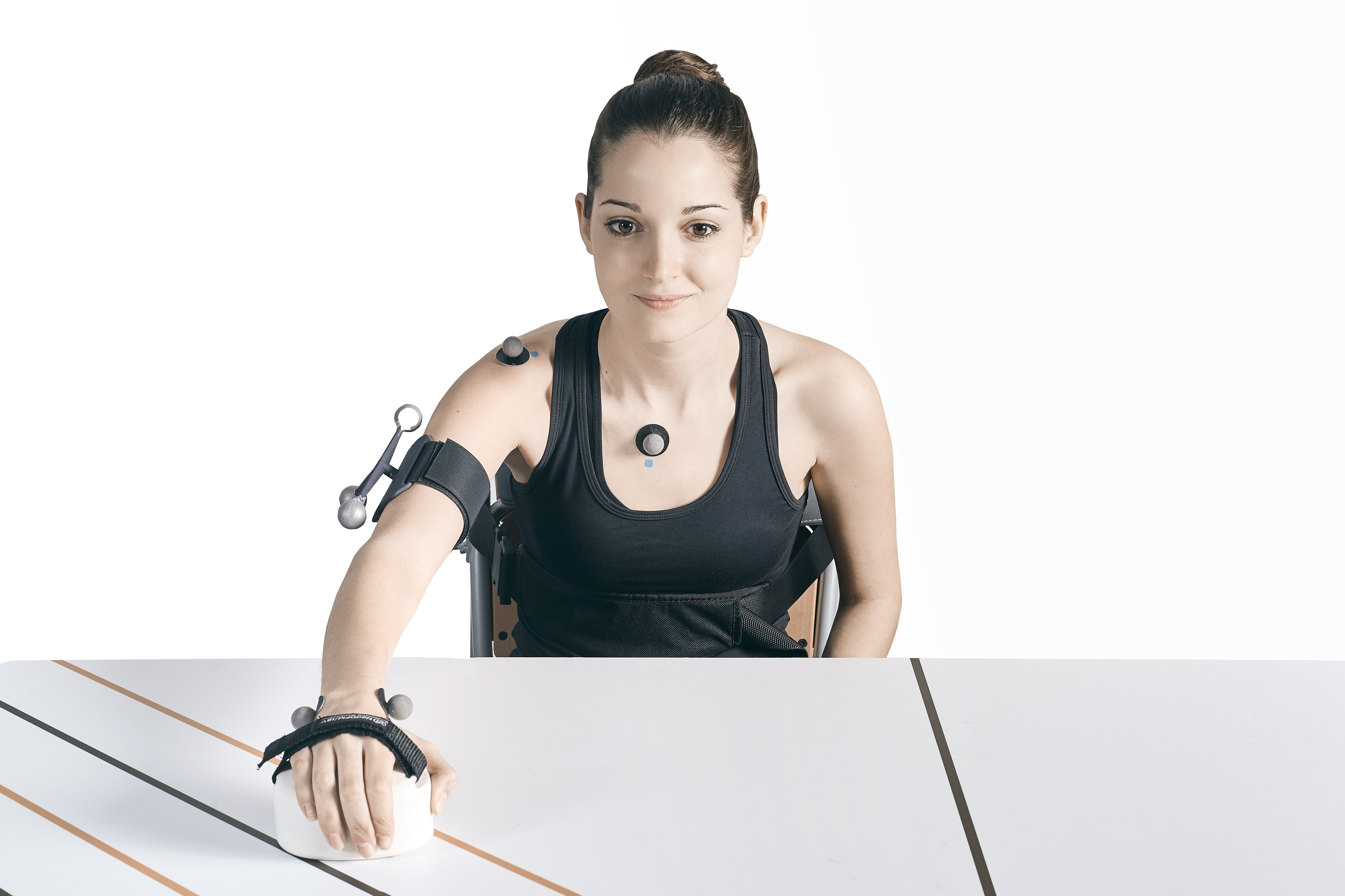 Illustration 1: Markers attached to a person (example) while performing the functional reach test, included in the NedCodo/IBV software. 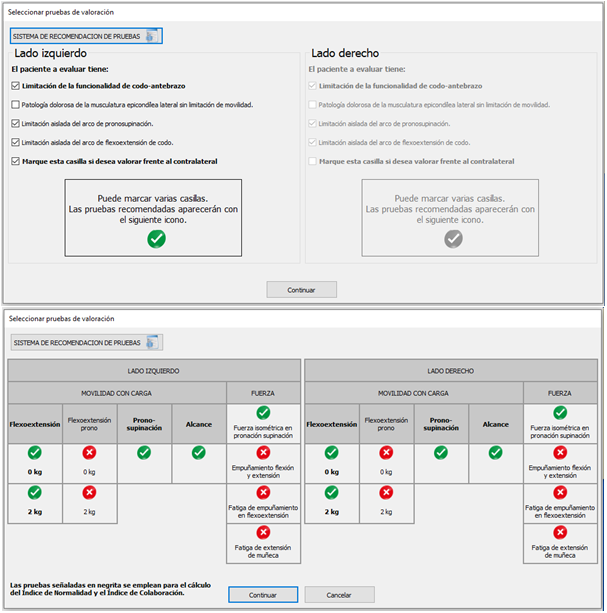 The results obtained after we performed the tests provided a final assessment with a Normalcy Index of 78% for the affected limb and 97% for the healthy limb. It was therefore considered that the elbow function, measured through the flexion-extension mobility test (0 kg and 2 kg), the pronation and supination test, and the reach test, was altered on the left side (Illustration 3). 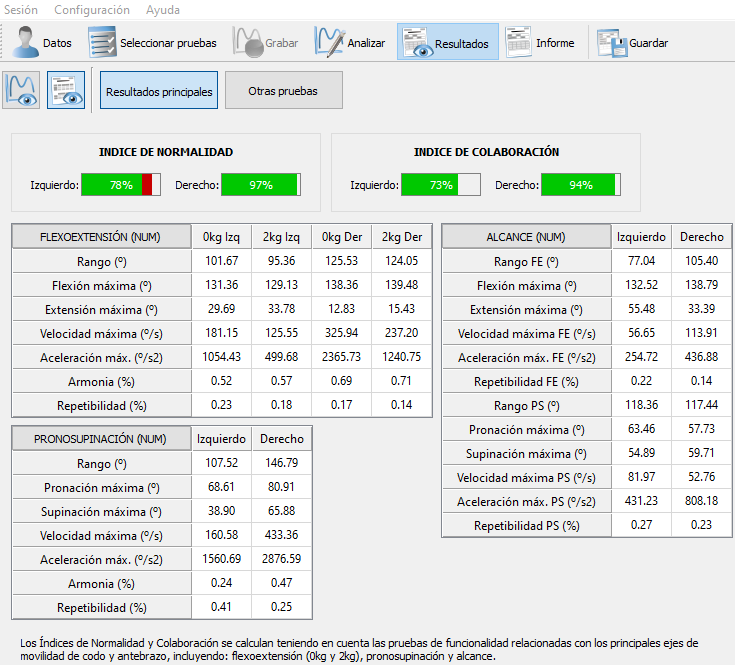 Illustration 3: Results tab of the NedCodo/IBV software showing the normalcy and collaboration indicators at the top.  The quantitative parameters of three mobility tests can be seen at the bottom.

The flexion-extension test consists of a cyclic movement involving the flexion and extension of the elbow at a gentle speed, reaching maximum joint travel for 20 seconds. This sequence is initially performed with a 0 kg weight and then with a 2 kg weight. The results (Illustration 4) show that the joint range in this axis is decreased on the affected side (left). The flexions performed are at the limit of normality, while taken as a whole, the patient’s extensions are diminished in both tests. In addition, the angular velocity for the movement with 0 kg is within the normal range, but when the load is increased (2 kg) this parameter decreases, both in comparison to normalcy and with respect to the healthy limb.

The pronation and supination test consists of a cyclic movement involving the pronation and supination of the forearm at a gentle speed, reaching the maximum of its articular range for 20 seconds. If we look at illustration 5, we can see that the pronation movements of the affected arm are within the normal range, albeit reduced in comparison with the healthy arm. With regard to the supination of the left elbow, this movement is diminished in comparison with both the healthy and the normalcy database. 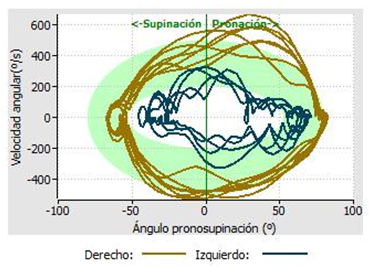 The isometric pronation-supination strength test is performed with the elbow at 90° and holding a specially designed device containing a load cell. Maximal isometric strength is initially performed in pronation and then in supination with the forearm in five different positions. The resulting data from this test (Illustration 6) shows that the forces are greatly reduced on the affected side with respect to the contralateral side in all the positions studied. 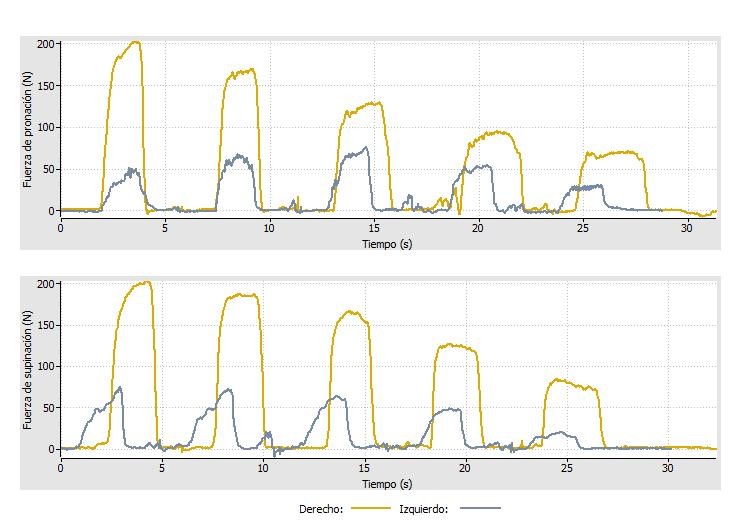 In summary, in this patient with a ruptured distal biceps tendon and who had undergone two surgical interventions, the data obtained using the NedCodo/IBV application show an overall limitation of his active mobility in the tests performed. The joint function of the left elbow is impaired in forearm supination and elbow extension when compared both to our normalcy database and to his contralateral limb. He also has altered isometric strength of pronation and maximal supination in all positions analyzed. The repeatability values of the movements performed, and the collaboration index obtained by the patient for each upper limb (CI 73% and 94% - values greater than 50% are compatible with a collaborative pattern) indicate that the results of the assessment are coherent, i.e. they reflect the patient’s real functional capacity.

After performing this clinical case and observing the results obtained by means of the NedCodo/IBV application, we can see that:

- In the assessed patient, biomechanical alterations are clearly observed in the active mobility of the elbow, in the extension and supination axes, in addition to an evident loss of strength in the pronation and supination axis in different positions.

- The NedCodo/IBV software application is a useful tool for clinical professionals, given that it facilitates the assessment process in elbow pathologies in an easy, streamlined and objective way. In addition, its biomechanical results can provide guidance on treatment by locating and quantifying mobility and strength deficits.

Read 21 times Last modified on Friday, 13 January 2023 09:33
More in this category: « The risks of teleworking and how to reduce them with Ergo/IBV
Published in Rehabilitation and personal autonomy
back to top