Analyzing new on-board and driving assistance systems requires complex and costly tests. The possibility of analyzing the complexity and driver risks associated to the use of these systems from the early stages of the development is key to guarantee safety and lower development costs.

With this purpose, a cognitive model (boxes diagram that represents the thinking process of a person in certain tasks or activities) of a vehicle driver has been developed. The model includes the three different levels of decision required for properly driving: strategic, navigation and control. The model has been implemented as a Discrete Event Model and includes a model of Declarative Memory and a Model for Advanced Workload Analysis. Nowadays, a modified scenario of the Lane Change Test (LCT) has been already implemented and it is about to be validated with real users. In the coming months, the Model should will be able to drive itself the LCT in the simulation platform at Instituto de Biomecánica (IBV), emulating the behavior of real users.

Driving is a complex and potentially dangerous task involving attention mechanisms and control actions at different cognitive (the process of thought) levels and different temporal scales: Drivers need to take a number of actions to arrive at their target place. Besides, these actions should be mediated by the state of the traffic and the environmental conditions. To achieve this, drivers must use cognitive tasks (level of thought process a person has reached or is using to solve a specific problem) involving strategic planning, but also sophisticated control and (human) motor coordination aspects.

Figure 1. Example of a driving situation.

The increase of vehicle automation and vehicle information systems (IVIS) introduce new constraints to the driving activity (Cacciabue 2007) that makes necessary to deep into cognitive modelling.

In order to tackle this complex scenario, there have been different approaches to model the behaviour of vehicle drivers that can be classified into (Engström and Hollnagel 2007):

♦ Taxonomic models: They are descriptive models or inventories of facts, which provide a description of the tasks related to driving without digging into the causes of those facts. Taxonomic models are built through task analysis, and are used to define the complexity of the activity that has been analysed, detect critical points, possible errors, etc. However, there is no possibility to ascertain what may really happen in different circumstances.

Functional models include the aforementioned cognitive models, in which mental processes of the driver determine what task is done in each moment, and the level of performance achieved by the human driver. There are sophisticated cognitive models, like the so-called “cognitive architectures”, which are potentially a powerful tool that can simulate mental processes, for a better analysis of the problems and risks that may arise during complex tasks. However such cognitive architectures have been seldom used in models of vehicle drivers with a few exceptions (Rosenbloom et al. 1991), (Salvucci 2006). The main drawback in the approaches based on cognitive architectures are the interaction of the different levels of control required for driving, while these architectures are mainly devoted to exploit just one of these levels.

♦ For modelling purposes, IMPRINT uses a Discrete Event Model approach, in which any change in the context (the perception of something in the road or the vehicle, an action of the driver, a change in the motion of the vehicle, or anything that may happen) is defined as an “event”, and a driving scenario is a sequence of events in time. Some events may be predestined to happen (e.g. a traffic light goes red), or may be activated by the combination of past processes and some rules defined in the system.

♦ For cognitive components, IMPRINT uses the Advanced Workload Analysis (Mitchell 2000), which is mainly devoted to the estimation of workload. In that approach, all processes of perception, reasoning, decision or action involved in a task, interact with each other such that using the cognitive resources of a person and the demands of the task components, an amount of “cognitive workload” (level of measurable mental effort put forth by an individual in response to one or more cognitive tasks) is calculated. Such models can determine the evolution of the driver’s workload in a scenario and the response times due to the processing of the workload made by the driver.

We have used this approach for developing a model of vehicle driver, improving the model taking into consideration the two lower levels involved in driving: The control of the vehicle and the motor control (control of body movements).

The tasks of the driver (e.g. move to another lane of the road, change the driving mode, look at the road) are coded as “processes”, which are sequences of events that activate or interrupt other processes and events, and are accompanied by calculations that modify the environment, for instance the position and dynamics of the vehicle, signs that appear at the sight of the driver, etc. Those processes operate at many levels, such that complex tasks are defined in a modular fashion: at the lowest level, there are “timeout” processes whose only effect is the pass of a defined amount of time. Building upon those “timeouts”, cognitive actions or basic motor control tasks with fixed time demands are defined, like looking at the road, recognising a sign, steering the wheel, etc. More complex tasks like vehicle control, lane change, switch driving mode, etc., are modelled by combinations or repetitions of those atomic tasks, such that the time that they take and their outcome may be affected by the interaction between the many processes and sub-processes that are running at the same time.

♦ The elements from the environment constraining the decision of the driver (other vehicles, the road, the IVIS, signals, etc.).

♦ A model for Advanced Workload Analysis. 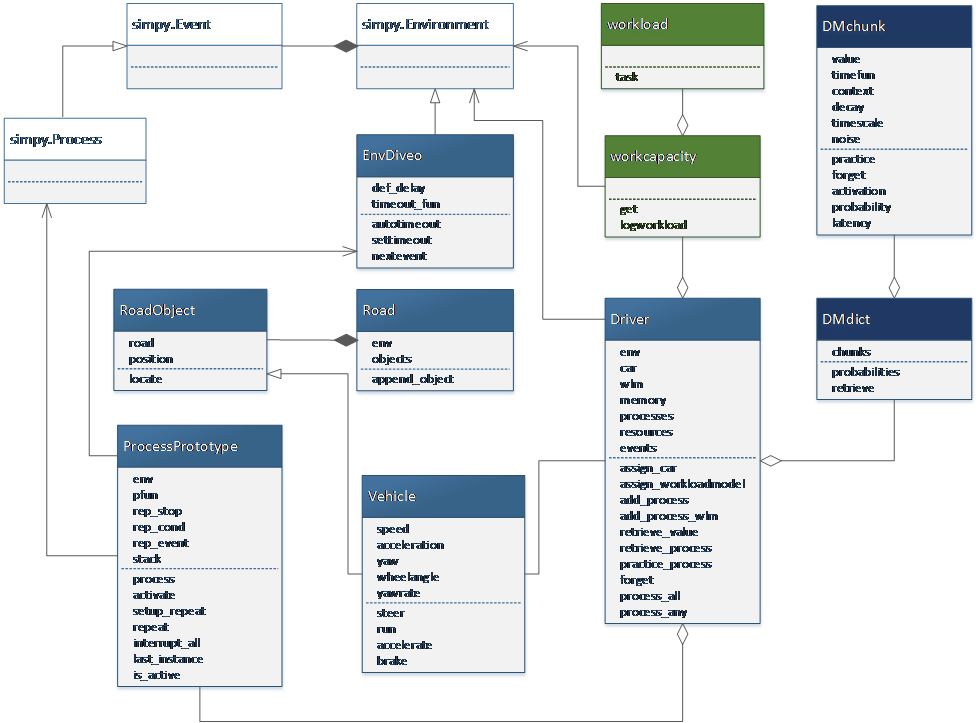 The Advanced Workload Analysis has been modelled with the workload estimations taken from literature (Bierbaum, Szabo, and Aldrich 1989). In that model, the cognitive tasks of the driver are special processes with a predefined completion time, which also consume a variable amount of work capacity, depending on the amount and type of concurrent tasks. A set of rules for prioritising and interrupting cognitive tasks simulate the delays in task completion due to the difficulty of making several conflicting tasks at the same time. Each time a new task is started, there is an evaluation, and, depending on their priority and available load, they can be done, delayed, or a lower priority task can be interrupted and left for resume later.

The learning model is based on the concept of “declarative memory”, a cognitive architecture used in Artificial Intelligence (Anderson, Matessa, and Lebiere 1997). This model adapts the time that is defined for the completion of cognitive tasks, on the basis of the number of times and how recently those tasks have been done or recalled in the near past.

The model has been applied to simulate a modified version of the Lane Change Test (LCT) as described in ISO 26022:2010 (en). This simulation involves the three levels of control required for driving:

♦ Strategic control is determined by the Lane Change Test, and consists in driving straight for 3 km.

♦ Navigation, it is simulated by the Advanced Workload Analysis and takes into consideration the processes of decision with the time required to do it.

♦ Motor control, it is simulated by the declarative memory model and the model of turning the steering wheel by the model of Salvucci (2006).

The modified Lane Change Test simulates a driver with an autonomous vehicle taking the control of the car and recovering the control after autonomous driving while having to manage a proper lane change according to the signals present in the environment (Figure 3).

Figure 3. Graphical representation of the driving states of the model: The simulation emulates the transition from AV to manual (left figure).

Figure 4. Comparison of the trajectories of the cognitive model driving simulations with (in red) and without secondary task (in green). Delays in the decision to turn when there is cognitive workload provoked by the secondary task can be observed,

The results of both models show (Figure 4) a greater variability at the moment of turning and delays in the decision to turn. The delay is clearer when there are several concurrent tasks (see x coordinate equal to 1400 in the figure).

A cognitive model has been implemented in a Discrete Event Approach. This model is flexible to be adapted to a wide range of real world scenarios. Nowadays a modified version of the Lane Change Test has been simulated. The results from the test are about to be validated with real users.

The present work has been developed under the frame of the project DIVEO.

DIVEO project is financed by the IVACE within the framework of the program of grants directed to technological centers of the Valencian Community for the development of non-economic R & D projects carried out in cooperation with companies for the financial year 2017, co-financed by the European Development Fund Regional (ERDF) in a percentage of 50% through the ERDF Operational Program of the Comunitat Valenciana 2014-2020