MOVE 4D: IBV develops the most advanced scanning system for the human body in motion

(*) The collaboration with the IBV of researcher Dr. Alfredo Remón is co-financed by the Torres Quevedo program (Ref. PTQ-16-08205)

The Instituto de Biomecánica (IBV) is at the forefront of the digital technology for the anthropometric and biomechanical characterization of the human body thanks to the development of MOVE 4D, a high-precision and rapid scanning system for the body in motion. This system opens up new options for the advancement and development in such varied sectors as clothing, textiles, biomechanical assessment in health and sport, digital animation or video games.

The IBV is the leading national center in the study of human body, especially in the fields of anthropometry and biomechanics. Since it was founded, it has used the most advanced technology to study human shape and dimensions, its variability, movement patterns in healthy conditions and those related to certain pathologies. As a result of these research lines, the IBV has consolidated transfer activities related both to knowledge and technological development.

The launch of MOVE 4D is another step to place IBV at the forefront of the research in anthropometry and biomechanical analysis of the human body. MOVE 4D is a 4D scanning system in high speed motion (180 frames per second) and precision (minimum resolution of 1mm).This technology makes it possible to study the shape, movement and soft tissue deformation of the human body, aspects that it was not possible to analyze until now.

CHARACTERISTICS OF THE SYSTEM

MOVE4D consists of capture hardware and control, processing and analysis software. The characteristics of the two elements that make it up are an absolute technological revolution in the current state of the art.

The main element of MOVE 4D is the scanning module, which performs a temporary scanning of a body area at high speed (Figure 1). The optimal arrangement of the modules covers a scanning volume that captures the entire body from any angle. The scanning module consists of two cameras and an infrared projector to capture information related to depth, a color camera to record texture, and a PC to process the point clouds in the module itself. 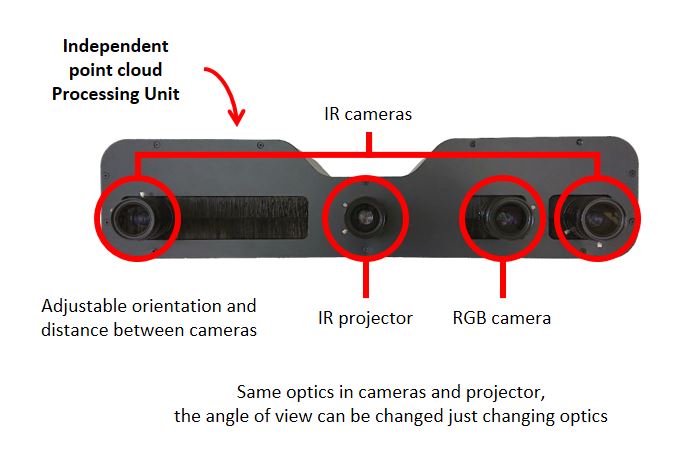 The optical features of the module make it possible to scan at a maximum speed of 180 frames per second (fps) and a resolution of 2 mm. This resolution can be increased up to 1mm of scanning at a speed of 90 fps. In a first version, the system can operate with a 12-module configuration.

The calibration system to align the captures uses a quick and simple procedure based on a rod and a reference system with active markers, which moves along the scanning area (Figure 2). The calibration takes little time, approximately 2-3 minutes. 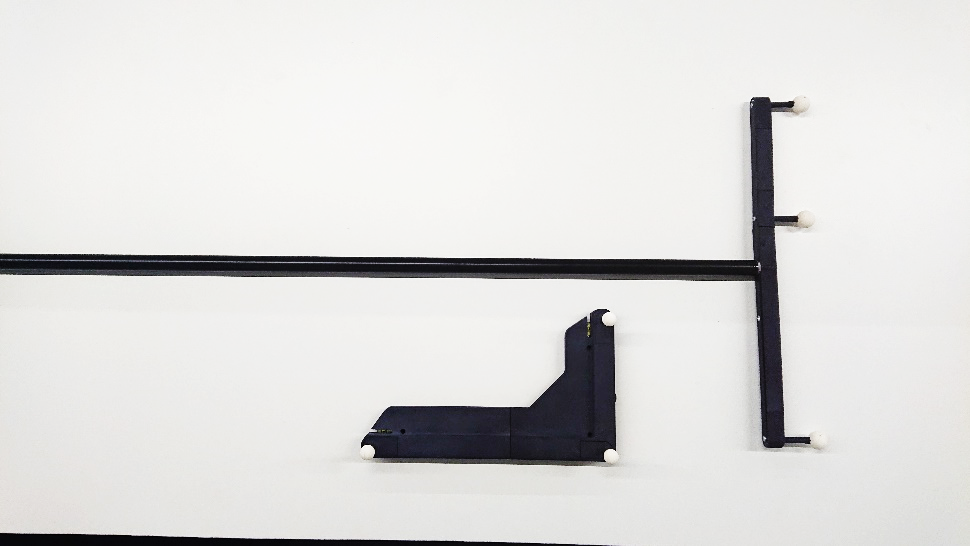 Figure 2. Accessories for the calibration process.

The measurement system is complemented by software to manage themeasurements and for data processing and analysis. This software integrates algorithms developed over years of research in the field of3D processing of body scanning and the incorporation of artificial intelligence algorithms trained with large databases.

The measurement management software incorporates several functions that make it easier for the user to manage the measurements and the studies performed. In this sense, the application was intended to design each measurement session with specific protocols, record the socio-demographic data of the subjects assessed on the same platform, and exportbatch data in order to avoid complementary registration platforms and software.

• Automatic and dense detection of body markers in all motion frames.

• Automatic calculation of measurements in A position, according to ISO 20685-1. 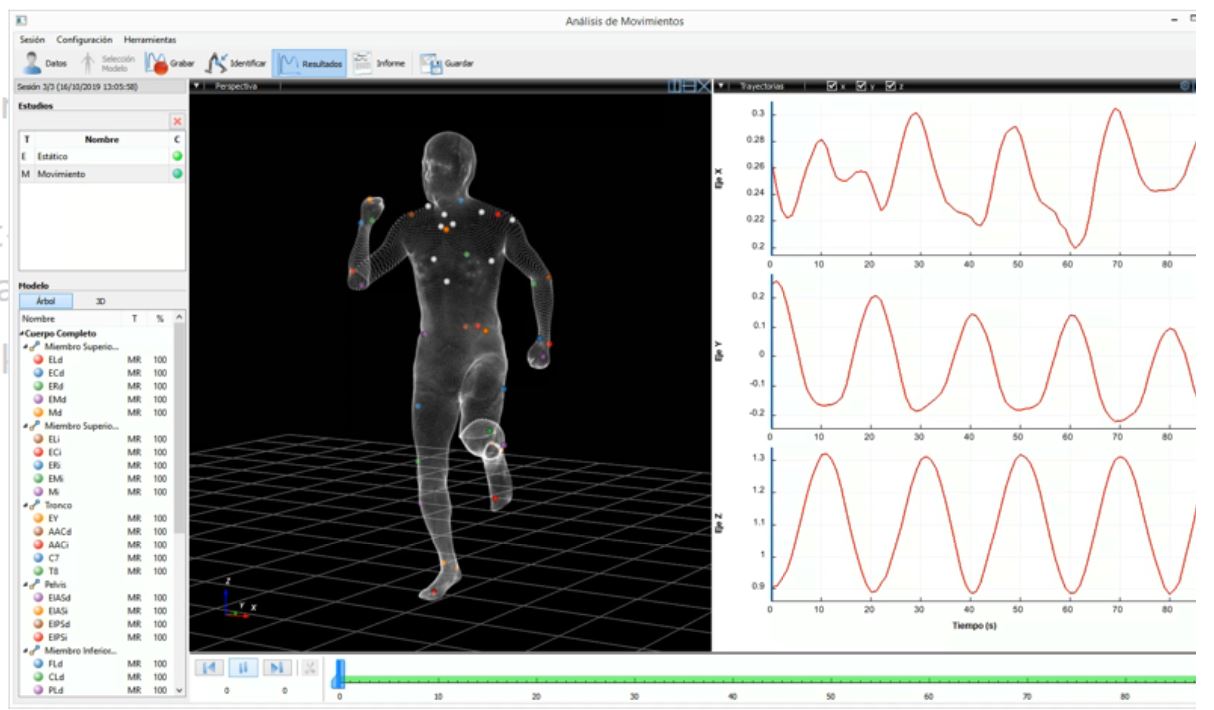 Figure 3. Calculation of the joint movement from a 4D scanning.

The first MOVE 4D system has been installed in the IBV Human Analysis Lab (Figure 4), a revolutionary and exclusive infrastructure for the scientific study of human beings.

In this laboratory, the MOVE 4D system is combined with many other technologies for biomechanical analysis, such as monocular cameras for motion analysis, thermal cameras, dynamometric platforms or surface electromyography sensors to monitor and study all types of human physiological signals. This laboratory will accelerate the generation of knowledge and its subsequent application in multiple contexts of real use. 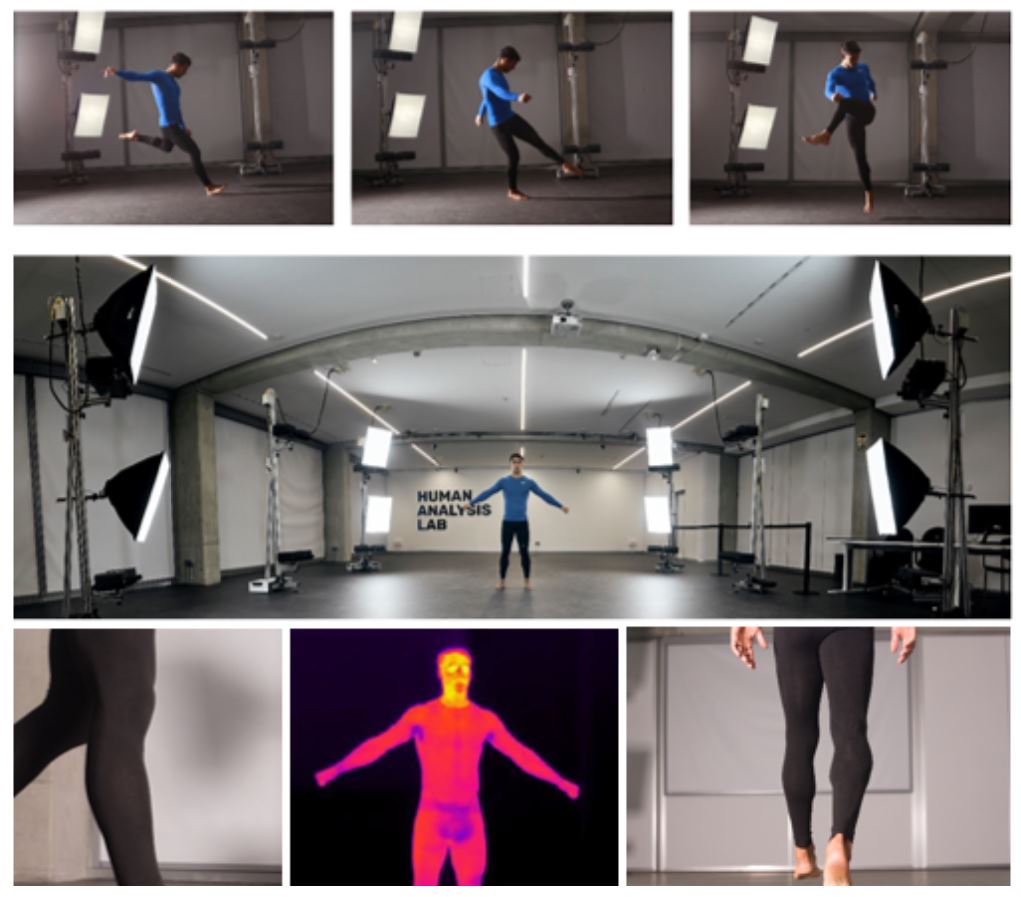 MOVE 4D opens up huge and very diverseresearch lines and applications. Many of them will come up in new research projects, as the use of the system becomes widespread and the results are disseminated.

• Generation of new human digital models in more realistic positions with greater precision to design products that are highly adaptable to the body, such as clothing, protective equipment and sensor equipped products.

• Digitization of the target population for the validation of products adjusted to the body during the design phase.

• New assessment methods based on dynamic morphometry for sports and health sciences.

In the field of human movement analysis, MOVE 4D opens up new research possibilities in the following lines:

• Reducing the number of experiments by re-interrogating the data with different biomechanical models.

• Calculation of the volume of body segments.

The current work was developed within the framework of the 3D-body-dynamics project funded by the IVACE within the grant program for the development of non-economic R&D projects at technological centers in the Valencian Community.It is co-funded by the European Regional Development Fund (ERDF) in a percentage of 50% through the ERDF operational program 2014-2020 for the Valencian Community.

The collaboration with the IBV of researcher Dr. Alfredo Remón Gómez is co-financed by the Torres Quevedo program (Ref. PTQ-16-08205)

Read 144 times Last modified on Thursday, 13 February 2020 11:56
More in this category: « Is it possible to scan a foot in 3D with precision using a smartphone?
Published in Clothing
Tagged under